A Federal Jobs Guarantee for Ex-Prisoners

Between August 21 and September 9, 2018, incarcerated people across the United States are engaging in a strike for better conditions inside prisons and substantial reforms to the criminal justice system. Second on their list of ten demands is a call for an immediate end to prison slavery: “All persons imprisoned in any place of detention under United States jurisdiction must be paid the prevailing wage in their state or territory for their labor.” For the 2,000 prisoners now fighting the largest fire in the history of California, a successful strike would mean earning a wage worthy of their hard work, one far higher than their current $1 per hour. And if incarcerated people can (and do) perform useful and valuable labor, as the California fires have shown, so can formerly incarcerated people.

The reasons to proactively include people with criminal records in a jobs guarantee program are both moral — everyone who wants to enter the workforce should be given a chance to work — and practical: Employing people with criminal records would also empower the rest of the workforce. When people are desperate for work, their bargaining power plummets, an even more urgent problem in a country in which union power has shrunk over the past century. Under-employment allows employers to offer lower wages, fewer benefits, and poorer labor conditions. But the more people are employed in good jobs, the more everyone else can negotiate for better jobs.

The class of people who fall into this category is not small: Close to 70 million Americans have criminal records, around 2.2 million of whom are incarcerated. Criminal records make it difficult to secure a job. Professional licensing rules contain thousands of clauses excluding people with records of misdemeanors and felonies, and finding work typically takes this class more than a year after being released. They remain less likely to be selected for an interview or receive a job offer, with even lower chances if the candidate is black. Controlling for other factors, this population’s wages also typically fall 10 to 40 percent below what other workers earn. And because individuals of color are incarcerated at higher rates than the rest of the population, it follows that these discriminatory employment practices hurt them and their families at disproportionate rates. This, in turn, only exacerbates inequality across our society.

Despite the misconceptions that many employers have about people with criminal records, people with a steady stream of wage income are less likely to commit crimes again. And the higher the wage, the lower the chance of re-offending: Studies show that even a modest wage increase to $10 or $12 per hour could halve the rate of recidivism and drop the crime rate by 5 percent. So while higher employment rates and wages would most directly benefit people with criminal records, society as a whole would enjoy collateral benefits like “reduced incarceration costs, increased income and payroll tax receipts, [and] lessened reliance on social services.”

The dark irony is that there is already a sort of jobs guarantee for up to 22,000 federal prisoners — it’s just an exploitative one. Federal Prison Industries, Inc./UNICOR, a corporation wholly owned by the federal government, pays federal prisoners 23 cents to $1.15 per hour to manufacture an impressive array of products ranging from furniture, apparel, and data services, to electronics and solar energy equipment, which it then sells to various branches of the government. (In comparison, prisoners who do non-UNICOR maintenance work must settle for 12 to 40 cents per hour.) These “wages” — if we can call them that — allow UNICOR to reap profits that it could not if it was obligated to truly compete on the market. UNICOR reported sales of $453.7 million for fiscal year 2017.

UNICOR does not operate in state prisons, which run their own work programs. Although some states pay a few cents or handful of dollars hourly, others like Georgia and Texas actually compel their prisoners to work for free. In 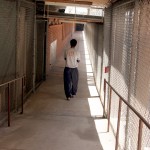 many instances, this state labor is performed at the behest of private corporations that have no qualms about boosting their bottom line by replacing union workers with indentured prisoners. Courts help feed this labor pipeline. In a recent investigative report, Reveal News described how state judges routinely send individuals to chicken farms and bottling plants operating labor camps, all under the guise of reducing the prison population. Their appalling labor conditions make it difficult to seriously argue that the formerly incarcerated should not be given a chance to work outside of prison.

UNICOR is proof that people with criminal histories are perfectly capable of of learning new skills and performing useful jobs. In fact, UNICOR claims that its programs prepare inmates for re-entry. Of course, it is difficult to market and apply those skills when outside employers discriminate against criminal records even while they rely on incarcerated labor. In other regions, the jobs and willingness to hire may be there while the skill set does not match the work.

Consider a world where, by law, UNICOR had to transition much of its work to free individuals with criminal records, with a corresponding jobs guarantee wage and benefits. Though justice is blind, perhaps having a significantly reduced labor force to exploit would encourage prosecutors, judges, and prisons to seek shorter sentences and advance release dates. It would prevent the government and private corporations from circumventing living wage laws (and the prohibition against slavery). Of course, UNICOR would no longer be able to force workers to show up every day. But most other employers are not legally permitted to enslave or indenture their workforce, and yet most workers show up every day.

Including people with criminal records and releasing as many UNICOR workers as possible would probably increase the price tag of a Job Guarantee. On the other hand, it has repeatedly been proven that incarcerating people costs more annually than ensuring they are cared for on the outside. So in the long run, this approach may be more cost-effective.

There are, of course, many details to be worked out. For instance, we’d have to carefully think about the conditions under which a formerly incarcerated individual should be placed in sensitive jobs like day cares or hospitals. And we must take seriously the fact every crime is the result of very specific circumstances, and that a past criminal record may not tell us much about people’s present ability to perform certain work. As this idea continues to gain momentum, there will be many more questions and much to scrutinize and vigorously debate.