In the midst of St. Louis County, MO’s opioid epidemic, we find ourselves in a criminal justice crisis. Drug addiction is a disease, not a crime. Prosecutors must stop packing our jails and prisons with those who need treatment, not punishment.

The effect of this overcriminalization is undeniable: Nine out of every 10 people in Missouri’s correction centers need addiction treatment. In fact, 35 percent of the new admissions to state prison in 2017 were explicitly sent to receive help with their addictions.

Since St. Louis County Prosecuting Attorney Robert McCulloch started his pre-charge, alternative drug court program in 2014, only 99 people have been enrolled. Only 36 people have completed the program. That averages to nine people per year. With drug abuse rates so high in the county, why are we not using the alternative drug court system designed to address this very problem?

Instead, McCulloch’s office continues to push for imprisonment, contributing to Missouri’s skyrocketing incarceration rate — and doing nothing to stem the devastating opioid epidemic. Missouri ranks No. 8 in the nation when it comes to how many of its citizens are behind bars. Since 2010, Missouri’s female prison population has increased 33 percent and is the fastest growing in the nation.Much of that increase is attributable to drug-related prosecutions.

Prosecutors are the most influential actors in the criminal justice system. Prosecutors have the power to decide what kinds of charges they’ll pursue and how severe the punishment will be. A prosecutor’s decision can dramatically shape a person’s entire life.

We know the criminal justice system is not equipped to handle the social and health issues that land many people in prison and jail.

St. Louis County needs reform-minded prosecutors focused on keeping the public safe by addressing the root causes of crime, not on obtaining convictions and harsh prison sentences at any cost. On McCulloch’s watch, the opioid epidemic has worsened, with devastating consequences for families and communities.

Imprisonment is a harsh and costly response to addiction. It often forces people into debt as they work to secure bail money to free their loved ones facing charges. Incarceration should be the last option, not the first.

St. Louis County should commit to sending the national average of 9 percent of all felony cases to an alternative drug court. Voters in St. Louis County must demand that their prosecuting attorney shapes a smart and fair justice system. 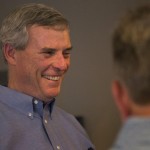 With a different approach, St. Louis County has an opportunity to become an innovator. Across the country, a growing number of forward-thinking prosecutors are leading the way in changing the culture of the criminal justice system and getting results. They have worked to become more transparent with and responsive to the communities they serve.

Prosecutors have power. We the people must make sure they use it for the health of the community.