Humboldt County in Northern California will be redesigning its transitional housing program for families into a model that emphasizes Housing First and rapid re-housing, although community fears and pushback have come as a result of this big change. Although a comprehensive, effective safety net recognizes a community’s diverse needs and offers a full circle of care, which includes activities like transitional housing, nationally we are working with limited resources, and when doing so, it is important to focus those resources toward approaches that are actually reducing homeless numbers and doing so in the most cost-effective way possible.

Transitional housing may be an appropriate intervention for some individuals and families experiencing homelessness, but for many, the same outcomes can be achieved through rapid re-housing, and at a significantly lower cost. Transitional housing is one of the most expensive interventions for homelessness. It also makes the assumption that some people are not ready for housing, but we’re all ready for housing. Shelter is a basic need, and once people have permanent housing, it allows them to lower their daily level of stress, which can in turn have positive effects on other issues such as mental health, substance abuse, employment, and education. Effective rapid re-housing programs focus on the housing first, and then follow-up with other services that clients want or need. It empowers clients to make these decisions on their own, to take their path toward self-sufficiency one step at a time.

Humboldt County needs to focus on rapidly re-housing the families at the MAC [Multiple Assistance Center] and targeting remaining funds to Housing First programs for its chronically homeless population. This approach will not only save money but also allow them to put their compassionate Humboldt hearts into action. Humboldt County is unique, and change is hard, but the area’s denizen’s need to imagine little Humboldt County joining the ranks of Salt Lake City, Phoenix and New Orleans in ending chronic homelessness.The Multiple Assistance Center, better known as “the MAC,” is a 100-bed complex currently operates as a transitional housing facility with on-site programs aimed at helping the families who live there overcome the challenges of homelessness.

Denise Mattson who has been living with her husband and their baby at the MAC, says:

We recently had a workshop about housing, and they taught us about credit reports, how you can look and see what prevents us from getting housing — like if you have a water bill that needs to be paid off. I have also taken life skills courses, learning about how to find employment, fill out housing applications and even reduce stress. And my husband has been attending a fathership group. 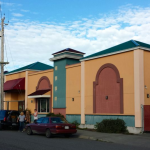 The facility is operated by the nonprofit Redwood Community Action Agency (RCAA) in partnership with the County of Humboldt and the City of Eureka, which owns the property. These agencies, led primarily by the county’s Department of Health and Human Services, recently decided to make some dramatic changes, repurposing the MAC building. Starting this summer the facility will no longer house or provide services to families; instead it will be used as an intake facility geared toward helping the county’s chronically homeless individual men.

Families living at the MAC, who in recent years have been given as long as 18 months to get their lives back on track before moving out, were notified they’d have to leave no later than June 30. The county and RCAA are working to get each family placed into more permanent housing, with funding for support services following them into the community.

I want to reassure everyone that the county is not in the business of increasing homelessness, and we’re certainly not going to be throwing children and families out into the streets. We would not close the MAC if we didn’t have an alternative plan for the families.

That alternative plan focuses on getting homeless individuals and families placed into permanent housing as quickly as possible, as opposed to the transitional housing approach embodied by the MAC.

Crandall and other officials say this shift in approach was motivated by two main factors: evidence and funding. In recent years, government agencies that deal with chronic homelessness — particularly the U.S. Department of Housing and Urban Development (HUD) — have themselves shifted gears, putting less focus on transitional programs like the MAC and more on “housing first” approaches, including rapid re-housing and permanent supportive housing.

Ed Cabrera, a San Francisco-based spokesman for HUD, said that the old-school model for addressing homelessness focused on “housing the most housing- ready”–the people who could show up for meetings and fill out applications.  But HUD is now encouraging local communities to take more strategic approaches in hopes of reaching “the most visible, the most vulnerable — the chronically homeless.”

In Eureka these days the most visible homeless people are usually men, often with addiction and/or mental health problems. This is the community that RCAA and the county hope to serve better by turning the MAC building into an intake facility where these men can stay for roughly 30 to 60 days while a long-term plan is developed for their housing and services.

Eureka has arguably been the ugliest and most volatile battleground in the fight to end homelessness locally, with regular raids on homeless camps, roundabout enforcement efforts like the a shopping-cart ordinance and escalating community vitriol which was partially (and illogically) sparked by the New Year’s Day murder of father Eric Freed.

Focus Strategies strongly advises the City of Eureka not to pursue approaches directed at better managing the existing problems, such as by increasing the frequency of police sweeps or creating a legalized camping area or ‘tent city.’ All available evidence shows that providing homeless people with housing, without making participation in other services a pre-condition, is the most effective way to reduce homelessness.

The latest messaging and data suggest so. According to the federal government’s Interagency Council on Homelessness, housing first programs “allow people with one or more serious disabling conditions to stabilize their housing and address underlying conditions that often have gone untreated for many years.”

The philosophy goes all the way to the top of U.S. government. President Obama helped codify the strategic shift during his first year in office by signing the Homeless Emergency Assistance and Rapid Transition to Housing (HEARTH) Acct of 2009. And when federal agencies adjust positions, nonprofit grant funders tend to follow suit. Sure enough, the shift in strategies has been trickling down to local communities around the country.