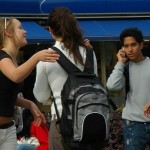 Since 2009, when the Senator Walter Rand Institute for Public Affairs at Rutgers University–Camden was tasked by New Jersey’s Office of the Attorney General to identify potential policies, practices and programs which could prevent or reduce juvenile delinquency, the city of Vineland saw a 76 percent decrease in juvenile arrests before expanding the coalition in 2013 to include Cumberland County cities Bridgeton and Millville.

We want to prevent the juveniles of today from becoming the young adults of tomorrow who are committing violent, heinous crimes.

For the past two years, the coalition has been supported by $120,000 in grants from the Cumberland County Board of Chosen Freeholders. In November 2013, the Rand Institute conducted a data walk, collecting demographic and crime data, such as age, gender, locations where crimes were committed and where perpetrators lived, from the three municipal police departments. They subsequently created a landscape of Cumberland County to show the coalition the five primary locations for juvenile crime.

Vineland High School North and South campuses were the two prime hotspots, but, the statistics don’t necessarily mean that more crimes are being committed there–only that more juvenile arrests are occurring there.

This tells us that the school is relying on law enforcement first versus any internal policies that they might employ to de-escalate situations and achieve conflict resolution.

Rand Institute recommended that law enforcement be called as the last resort, and not the first. Swan believes that when officers are called to resolve a physical conflict, it also increases the possibility that, in addition to disorderly conduct, juveniles could be charged with assault on a police officer and assault on school personnel as a result of breaking up the fight. As a result, even if juveniles didn’t have any prior criminal history, they would have to contend with the ramifications of new charges on their record. “In most cases, these incidents could probably have been handled by security guards, guidance counselorsor teachers,” says Swan.

The data walk also revealed that many juvenile arrests occurred in the morning, prior to the start of school. Based on these findings, the Rand Institute suggested that since police officers already visit the schools on a daily basis, visits should be made in the morning to create a visible deterrent. Even if kids are just sitting in a car, having that visible police presence makes a huge difference, Swan feels.

The coalition principally aims to reduce the number of arrests by increasing the number of stationhouse adjustments performed by chaplains. Through an agreement with the three police departments, youth who are arrested for a first-time, non-felony offense meet with a chaplain, who provides counseling and assigns them four hours of community service.

Over the past year, Vineland chaplains have been assigned to middle and high schools, where they speak with juveniles and, when necessary, perform stationhouse adjustments. The chaplains also visit the schools periodically to establish a rapport with the students and work closely with guidance counselors, school psychologists and administrators to identify at-risk youth before they show delinquent behavior.

School personnel learn that the chaplains are invaluable tools who can be called on before they call law enforcement. If there are charges that can be stationhouse adjusted, then juveniles can receive community service and get back on the right track, instead of going through the courts.

The coalition demonstrated the success of the practice last summer. In an effort to indoctrinate the newest chaplains, the coalition partnered with the Family Success Centers in Vineland, Bridgeton and Millville, a network of community-based gathering places that offer family support services, to organize a countywide curfew sweep on August 1. Twenty-six youth were escorted to these centers, where they met with a chaplain who advised them of curfew restrictions, the spike in crime statistics after dark and the range of available social services and resources. Overall, the sweep was a success, since no juveniles were arrested and all were released to a guardian.

This was a non-punitive educational event where we were more interested in sending a message to the kids that they could pass on to their peers. The sweep did uncover a .45 caliber gun and two knives.

The coalition now hopes to duplicate that success by involving school districts and their respective personnel in a much more systematic way.

That’s really our focus this fall, so that by the end of the spring, we have a fully integrated relationship with the schools. All school districts in the county are invited to participate. For the coalition to be effective, we need that synergy to exist between the schools, law enforcement and social services.