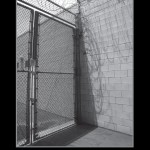 Once a week, three inmates from the Prairie du Chien Correctional Institution (PDCCI) are released to Couleecap for three hours to perform volunteer labor, accomplishing work such as sorting and pricing clothing, testing electronics, sorting games and puzzles, putting away food pantry groceries, folding bags and otherwise performing innumerable other jobs. This is all under the supervision of PDCCI’s Sgt. Tanner, alongside the regular Couleecap and Bargain Boutique workers and community volunteers. Tanner said:

The ERP guys are all volunteer inmates who enjoy coming here. It gets them out in the real world and they appreciate that they’re helping out the community. Many of these inmates are the type of men who end up utilizing programs such as the food pantry and thrift shop when they reintegrate into the community.

Though PDCCI is considered a medium-minimum security prison, all ERP inmates are classified as minimum security, which means they have not committed “dangerous” crimes and pose no escape risk. Background checks and paperwork are done and the men must be approved before starting the work.

I think that they’re not only happy to get out, but also once they see what the work is and that the proceeds help people in need, they like it all the more. They come here with such great attitudes and they can accomplish more in three hours than most people can in eight hours. It’s nice to have the men with the muscles to help with the heavy lifting.

When the food truck delivers federally-supplemented food once a month (from  The Emergency Food Assistance Program from the USDA Food and Nutrition Service) , “the inmates may stay longer than their three-hour shift to assure all the food is put away,” she added.

In the past year since PDCCI and Couleecap began partnering for this program, at least 50 inmates have helped at the thrift store on four different occasions to accumulate 12 hours each. Once they’ve hit 12 hours of community volunteerism, they’ve completed the program. Tanner added:

A lot of them want to volunteer more than that. Everyone involved would like to see this opportunity happen two times a week, for three hour shifts. But PDCCI is short on staff to make it happen.

Sturmer said the community is in the position of being truly blessed to have a lot of volunteers, yet Couleecap is really in need of more. “They can work one hour a week, there’s no set schedule, every little bit helps. Kids can volunteer too,” she stated. “Some of the other volunteers were apprehensive at first (about the inmates working alongside them), but now, especially when they see how hard-working they are, everyone really enjoys it and has become very accepting of it.”

Tanner said, for the inmates, this positive relationship within the community is good for all. As part of the earned release program, these interactions help the inmates realize more about the crimes they committed, who they affected and how they impacted people. It’s part of their community reintegration process.

“It’s good for them,” he stated. “They’re doing great work, they like it, and a lot of them want to come shopping here when they get out.”