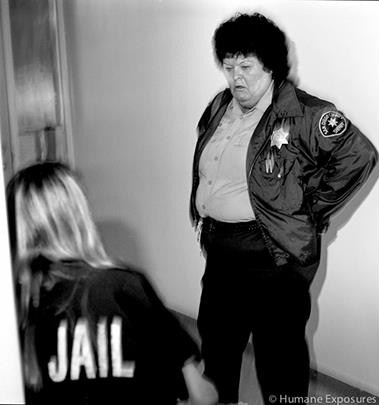 banding together to combat the 600% increase in female incarceration in the US over the past 30 years. About 7,000 women in Iowa are either on probation or parole, according to a recent report.

The key is prevention. We don’t want moms wearing jumpsuits. We want them wearing caps and gowns.

Invest in Kids, a national organization, is leading the charge for the reauthorization of the Maternal, Infant, and Early Childhood Home Visiting Program, in which nurses and other mentors work inside the home in neighborhoods that are often poverty-stricken and violent, teaching mothers about healthy pregnancy and safe discipline practices.

The organization’s state-by-state report, titled “Orange Is Not Your Color,” showed more than 600 women are currently incarcerated in Iowa and thousands more are on probation or parole. Two-thirds of women in state prisons nationwide are mothers.

Des Moines Police Chief Doug Harvey doesn’t want to see anyone wearing orange, because then, what happens to the children?

Twenty-seven Iowa law enforcement leaders and prosecutors are among the 1,000 who signed a letter, asking Congress to restore $400 million in federal funding for the program next year. Iowa received $7 million last year with the capacity to support around 700 families in 17 counties. That money supports 75 percent of the state’s three programs.

Des Moines’ Nurse-Family Partnership serves pregnant women in the area until their child turns 2 years old. Jennifer Boeding, a maternal child health nurse with the partnership, said it serves mostly teens referred by Des Moines Public Schools or doctors. The nurses work alongside the mother, building trust and directing her toward education and health resources.

Some of these women never had a trusting relationship in their lives,

These programs also save taxpayer money, said Polk County Sheriff Bill McCarthy. The Nurse-Family Program of Des Moines saved its client families about $17,000, which in turn is a savings for law enforcement if fewer children and mothers are entering the criminal system, he said.