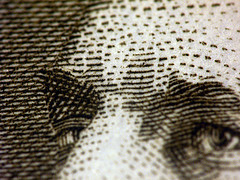 Picture an inmate at the end of his sentence. The barred gates of the jail open up, and he steps out into the fresh air of freedom. Let’s assume this is an inmate who has been wholeheartedly reformed, kicked his bad habits, and has a determined attitude about rebuilding his life.

Then the bill comes. Not the rent or the bill for utilities, but a bill for the legal fees incurred, plus fines. Suddenly, that inmate ends up back in prison through no fault of his own except for lack of resources.

This is the picture presented by Charlene Muhammad of the New America Media as she examines the new findings presented by the ACLU:

After a year long investigation into the assessment and collection of fees associated with criminal sentences in Louisiana, Michigan, Ohio, Georgia, and Washington, the ACLU reported in ‘In for a Penny: The Rise of America’s New Debtors’ Prisons,’ that courts across the U.S. were profiting from debtors’ prisons by violating a Supreme Court decision ordering courts to investigate a person’s inability to pay before returning them to prison.

Since the poor and the minorities are disproportionately represented in the average jail population, this raises a number of disturbing issues. Since Muhammad’s article is quite long (and is highly recommended, by the way), we’re going to focus on one of the people she has interviewed, Geri Silva.

Silva is the director of Families to Amend California’s Three Strikes Law, and she raises many valid points. For on thing, in a country where right to counsel is axiomatic, the idea of making everyone pay the fees and fines irrespective of their financial means is ridiculous. That right to counsel exists to protect those who have no means:

[Silva] said the irony is that states are jailing people in ‘cash-strapped’ cities for failing to pay their legal fines, but turn around and pay triple or quadruple that amount to put people in jail.
‘It sort of leads one to believe that perhaps jails and prisons are money making enterprises for the states. All roads lead to prison and all thinking leads to the fact that if they’re filling these prisons, it’s not about public safety obviously but it has to have something to do with financial gain for the industry itself,’ Ms. Silva said.
[Silva] reiterated ‘In For a Penny’s’ position that men and women who are re-entering into society from prison already face tough obstacles. They have to try to rebuild their lives with reduced or no incomes, worsening credit ratings, poor housing prospects, and greater chances of recidivism.

Think back to the hypothetical inmate: Will he make it out of the jail with that same attitude after this, or will it kill the idea that he can be a productive member of society? After all, he’d played by the rules, and through no fault of his own ended up in prison again. How would you feel?

‘How far will they go? Who are they trying to kid with this? How do you get blood out of a turnip? How does somebody who can’t pay, pay? Will they then find the one person who had their nails done or something instead of paying? Is that what they’re going to do to justify this insanity,’ Ms. Silva asked.
According to Ms. Silva, all of these issues that hang over a poor person who has been incarcerated stems from America’s building an industry that is skewed, sinister, uncivilized, and centered on punishment. Ask taxpayers if they would rather pay $600 in legal fees or thousands in jail costs and they would pick the more sensible route of less costs, she said.

Which brings us back to one of our recurring themes: It’s More Expensive to Do Nothing. Once more, the imbalance between taxpayer expenditure for jail costs is staggering compared to the cost of defraying these fees. As taxpayers, we would love to know that our taxes are not only being deployed to an effective program, but also that they are being reduced due to that program’s efficacy. It is, as they say, a no-brainer.

Consider the massive amount of cash it takes to run a jail or prison. Think about the cost of everything, from guards to food to laundry, but also about the number of staff needed to ensure a smooth operation of the facility.

Let’s close with one more remark from Silva:

‘The industry itself is tremendous. Can you imagine what it takes to run, say, California State Prisons in terms of food services, clothing, armaments, initially the building trades? It’s a multi-billion dollar industry that a great number of people are getting fat off of so it’s so disingenuous for them to say they’re losing money because people aren’t paying their fees,’ Ms. Silva added.

Should we be paying for this, or should we demand fiscal responsibility and a new approach?