Age Limit for Foster Care in California Goes Up to 21 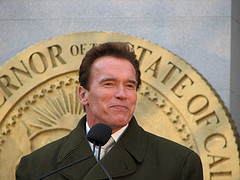 The campus of Vista Del Mar Child and Family Services last Wednesday was the epicenter of an enormous change for California. Governor Schwarzenegger performed a ceremonial signing of Assembly Bill 12, a bill that  will keep foster care kids from aging out of the system when they turn 18. Schwarzenegger called the idea of taking care of oneself at 18 “ludicrous.”

Brian Watt, a reporter for 89.3 KPCC, reports that the Governor refers to this extension of benefits as a partnership:

‘The kids have to take care of things, and also we have to take care of things,’ [Gov. Schwarzenegger] said. ‘We for instance continue giving them financial and social support, which is important for them, but they in return have to go to school, or go to work and meet regularly with their case workers. But let me tell you something: this is the greatest investment that we can make in our state.’

Now, the refrain that “children are our future,” while true, is often invoked but seldom truly heeded. What makes this a practical plan? The governor cited some promising data in his address:

He referred to study results that say for every dollar the state invests in foster care, it saves 2 and a half dollars in the future. Former Assembly Speaker Karen Bass co-wrote the legislation. The Los Angeles Democrat and Congressional candidate said the economic recession has given rise to a common expression: Boomerang Kids.
‘Young people forced by the economy to return to their parents’ home and support,’ said Bass. ‘But what happens to a boomerang that doesn’t have a place to go back to? It just gets thrown away.’

We’d say that a return of two and a half for an investment of one is a no brainer. Not only does it make sound financial sense at a time when it is vital for the state to save money, but it also shields those in foster homes from the trials and tribulations of possibly ending up on the streets.

Karen De Sa, writer for The Mercury News, brings us some supporting data:

Research by the Urban Institute and the University of Chicago has documented these outcomes. Within two years of leaving foster care, one in four teens lands in jail. And with high school graduation rates of less than 50 percent, more than half are unemployed. Close to one in four ends up homeless within 18 months.

Frightening numbers, and ones that stand to increase if the American economy continues to be so erratic. This is why AB 12 is essential, as this real-world comparison demonstrates quite well (also via The Mercury News article):

[…A] study released last year by child welfare researchers at the University of Washington and the University of Chicago estimated that extending foster care can change those outcomes — and result in cost savings for California. The multiyear report tracking young people exiting the foster care system compared Illinois — a rare state allowing foster care through age 21 — with states lacking such support. Illinois youths were three times more likely to enroll in college and 65 percent less likely to be arrested; the young women were 38 percent less likely to get pregnant.

Alanna Connaway, a writer for The Boot, reports a telling statement by a San Jose Assemblyman:

‘For generations, foster care youth faced being kicked out of their foster homes simply because they had turned 18 or graduated from high school,’ says Assemblymember Jim Beall (D-San Jose), who introduced AB 12. ‘Without any means of support, they were left to wander the streets for shelter and food. Many had no choice but to return to the parents who had neglected or abused them. AB 12 ensures they’ll have a safe place to live and stability until they are 21. It will help clear the way for eligible foster care youths go to college and begin careers that will contribute to our society.’

As states across the nation feel the economic noose tightening around their necks, it is essential that we find ways to save money and do so in a way that supports a restoration of the social fabric of the community. This is a hand up, not a handout.