The Forgotten Prisoners of Hurricane Katrina 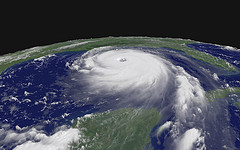 Five years ago last Sunday, the city of New Orleans flooded when the levees failed in the wake of hurricane Katrina. The time following the flood was a complex and horrible stew of tragic tales and noble moments, many of which never made it into the mainstream media. Today, I would like to take a look at one especially disturbing set of stories: the plight of the imprisoned when the flood waters rolled in.

People have been thinking about this a bit more since the issue was addressed in an episode of HBO’s Treme. Last April, the critically acclaimed series presented a story all too familiar to people in the area, yet strangely glossed over by the national coverage. It was a subplot about a woman whose brother was incarcerated when the flooding occurred. All attempts to locate him had come to naught for months, until she finds picture of him amongst the prisoners from the Orleans Parish Prison (OPP), who were herded onto an I-10 overpass, where they have stayed without supplies or shade for days.

The Back of Town blog, which analyzes Treme from the perspective of those who were there, immediately provided a counterpoint, penned by Sam Jasper: “You had him all the time! – Toni Bernette HBO Treme. [Disclosure: I sometimes contribute to Back of Town. – Loki] In it, she recounts being told of the reality of the situation by one of the former prisoners:

Eventually he was one of those ferried to the overpass. No water, no food, no information at all. Only sun. He said he noticed his skin was in bad shape from having been in the water with god knows what else polluting it. Eventually he wound up at Hunt in San Gabriel. There 3000 OPP inmates were put in a maximum security prison (remember, many had not yet been charged or were in for minor misdemeanors) in a field. At this point there was no more sorting. No more protection from the violent offenders. Everyone was dumped in the field. There was a young man who’d never been in jail before near Ike. The kid was panicking and falling apart. Ike got hold of him and calmed him down, explaining that he didn’t want to draw attention to himself or he’d be in danger. The young man listened and glued himself to Ike, shaking the entire time. He was shaking not only from fear, fear of the other prisoners and the extremely hostile inmates of San Gabriel, but also from dehydration. He remembers it taking a long time before the prisoners got food or water.

As for the authorities, they had no idea who any of these guys were. No records had accompanied them, not only because of their evacuation but also because most had been destroyed in the basement of OPP. So the authorities now had 7000 people in their custody and no earthly clue who any of them were. Were they violent rapists or a guy who mouthed off to a cop on Frenchmen Street? No idea. Families had no way of finding these prisoners and the prisoners had no way of knowing what had happened to their own families, much less a way to contact them when communications were completely useless at that time. Lots of people just got lost. The public defenders were gone, many just quit, already overloaded with casework before the storm ever hit.

It is common knowledge that the American penal system is a shambles. Add the chaos of a natural disaster such as a California forest fire or a man-made one like the levee failure in New Orleans, and the breakdown is terrifyingly complete. The lessons of five years ago are vital for all of us, no matter where.

If you want a detailed view of exactly what happens when an already broken system is embedded in a situation of a complete societal breakdown, I advise the following BBC documentary, embedded here in full, Prisoners of Katrina:

In a time when earthquakes, forest fires, tornados and terrorist threats seem to crop up every season, it seems wise to examine these stories and work towards the prevention of more of them in the future. When Mother Nature calls, she calls collect, and you can’t refuse the charges.

Source: ““You had him all the time!” ~Toni Bernette, HBO Treme,” Back of Town, 04/22/10
Source: “Down by Law: Orleans Parish Prison before and after Katrina,”  Dollars and Sense, 03/06/06
Source: “ACLU Report Details Horrors Suffered by Orleans Parish Prisoners in Wake of Hurricane Katrina,”  ACLU, 08/10/06
Source: “Prisoners of Katrina,”  Google Videos, 08/06
Image by NASA Goddard Photo and Video, used under its Creative Commons license.
Visit Us on Facebook: Humane Exposures Publishing , downTownUSA, Maggots in My Sweet Potatoes, It’s More Expensive To Do Nothing