Veterans Make Up 35% of the San Diego Homeless 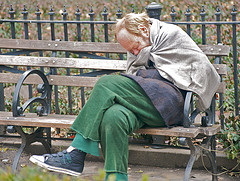 As you walk through the streets of San Diego, or any other American city, you will see the homeless. People living rough in the urban landscape. Each one is somebody’s brother, mother, son, cousin, or spouse. In addition, many of them had fought for our country.

Dylan Mann, a contributor to Voice of San Diego, says it well:

You see them in the medians at intersections and at the bottom of freeway off-ramps. Suntanned and weary in camouflage pants, they hold magic-markered signs announcing: ‘HOMELESS VET — ANYTHING HELPS — GOD BLESS.’ And you feel empathy for them, don’t you? No matter what you think of our nation’s military campaigns, it’s undeniable that here before you is a person that once served our country, but now he sleeps outside and isn’t sure when he’ll eat next.

Because of good weather and a high cost of living, San Diego has a lot of homeless people. There are 8,500 homeless people [PDF] in the county and 35 percent of them (3,000) are veterans. The relatively high proportion of veterans among San Diego’s homeless is probably due to our proximity to military bases.

Among the homeless nationwide, veterans comprise 20-25%. Now, it is no secret that the strain of combat can create a wide variety of mental ailments. From “shell shock,” to “battle fatigue,” to post-traumatic stress disorder (PTSD) — the name has changed repeatedly while the ailment itself has remained a constant backbeat to our international conflicts. Is this the prime cause behind the number of veterans on the streets? Maybe not. Mann continues:

But, according to the National Coalition for Homeless Veterans, only a third of homeless veterans were ever stationed in a combat zone. So, why are the other two-thirds on the streets? Unfortunately, nobody knows for sure.

While there may not be certainty about the cause, there are at least some possibilities:

The Rosenheck-Fontana study of Vietnam veterans shows various correlations, but its takeaways are not entirely clear. The study’s major finding was that if upon returning to civilian life, veterans had low levels of social support, non-PTSD psychological disorders, substance abuse, or were unmarried, they were significantly more likely than their peers to be homeless.

The factors should look familiar if you have been following our work. They are circumstances that crop up repeatedly in our examination of homelessness and other social justice issues. Likewise, Mann cites additional factors that are, again, familiar to us from our prior research:

Additionally, it identified several factors that predisposed soldiers to homelessness. If vets had been foster children or had significant childhood trauma (e.g. physical, sexual, etc.) before entering the military, they were more likely to be homeless, whether or not they saw combat while in the service. These results could suggest that strong emotional development in childhood is necessary for soldiers to reintegrate into civilian society. Alternatively, they might mean that troubled youth are more likely than their peers to join the military. But, in the end, we can’t definitively say why so many non-combat veterans end up being homeless. The more important question, of course, is ‘How do we get them off the streets and back to normal, productive lives?’

And that, indeed, is the crux of the matter — how to reintegrate these people into the everyday society they have left behind? Switching our emphasis from retribution to rehabilitation is one approach that seems to consistently yield greater and more lasting results when encountered in practice. Mann spends almost half of his column on examining the Veterans Village of San Diego (VVSD). It seems like a very interesting project, one of the few that works in conjunction with — rather than in opposition to — the Veterans Administration.  Just click the link under the Sources (below) to read more.

Source: “Why So Many Homeless Vets in San Diego?,” San Diego Voice, 08/25/10
Image by Ed Yourdon, used under its Creative Commons license.

Jenifer Goodwin, HealthDay Reporter for BusinessWeek, recently wrote about a study published in the July/August issue of the Child Development journal that explores this issue within the context of the September 11th tragedy. Goodwin writes:

Kids whose mothers struggled with post-traumatic stress disorder (PTSD) and depression after the 2001 assault on the World Trade Center were more likely to have behavioral problems three years later than children whose moms coped better with the attacks, the researchers said.

This is in line with the work of Dr. Bruce Perry, which we’ve discussed on this blog. Just as with his work, we find that the mental stress undergone by the parents communicates itself to the children. This indirect trauma is a powerful force. Goodwin continues:

‘With young kids, you have two possible sources of trauma: what they experienced directly, and how they react to the impact on their mother from what she experienced,’ said lead study author Claude Chemtob, director of the Family Trauma Research Program at New York University. ‘What we learned was, in fact, that if the mom’s experience with 9/11 led to her having depression or PTSD, it had more of an impact than whether the kids saw it or not.’

Katherine Muller, assistant professor of psychiatry and behavioral sciences at Albert Einstein College of Medicine in New York City, points out that while the findings related to the PTSD and depression are interesting, there is nothing in the study to directly link those ailments to the terrorist attacks. This does not demonstrate the lack of usefulness of the data, simply the lack of a measurable connection with that tragedy as opposed to other traumas. Goodwin quotes Muller as saying:

‘The value is there is more evidence that when moms have these two conditions at the same time, there is some impact on the kids, whether it’s related to 9/11 or an earthquake or even more personal experience of trauma such as domestic violence or abuse or a car accident.’

With the violence that can erupt in an urban setting, it is hardly surprising that opportunity for trauma would be greater in the low-income areas. Whether it is that sort of trauma or something more disturbingly prosaic — such as child abuse or neglect — the effects are lasting.

The escalation of behavioral problems in these cases is a symptom of a missed opportunity, the opportunity for the children to truly realize their potential. The seeds of our societal future are sown in the homes of our children.

Dr. Perry and The ChildTrauma Academy

Questions of abuse and neglect are the tricky ones. Just like so many issues in life, they are vastly more complex than they seem at first. In the case of the children, whose bodies and brains are constantly developing, these complexities can span a broad array or disciplines.

Enter The ChildTrauma Academy and its Senior Fellow Bruce D. Perry, M.D., Ph.D. The Houston, TX-based CTA describes itself as a not-for-profit organization that is “working to improve the lives of high-risk children through direct service, research and education.” Dr. Perry is an internationally recognized authority on children in crisis.

As a native New Orleanian, I must admit to being quite partial to the work Dr. Perry has done in the aftermath of Hurricane Katrina. The plight of our city’s children and the elderly was one quite evident to me from the start, and I think his work was important. This excerpt from Dr. Perry’s article, “The Real Crisis of Katrina,” applies not only to the child survivors of the Gulf Coast disasters, but also to children in general:

We know that traumatic experiences can result in a host of chronic, sometimes, life-long, problems. More than 35% of the children exposed to a single traumatic event will develop serious mental health problems such as post-traumatic stress disorder (PTSD). That is just the start, however. Children exposed to adverse experiences are at much greater risk for physical health problems throughout life; this includes heart disease, diabetes and hypertension. Traumatized children are at much greater risk for other emotional, social and mental health problems; and as these children grow into adults the risk follows them. Adults with childhood trauma have increased divorce rates, depression, post-traumatic stress disorder, alcoholism, drug abuse and dependence, school failure, and unemployment among many other problems. These children have a much higher probability of requiring the services of our expensive public systems throughout life; special education, child protection, mental health, health and criminal justice.

That makes perfect sense to me. I am in my 40’s, and I have certainly experienced a deterioration in several aspects of my physical health in the five years since Katrina. I’ve also seen the widespread symptoms of PTSD firsthand after the flooding. One can only imagine the effects of these stresses on a developing child, especially when the adults around that child are experiencing similar privations.

Dr. Perry’s article continues with an important message of hope:

And we also know that when traumatized children receive appropriate services, they can heal. We know that if traumatized children can live in safe, consistent, relationally-rich, and nurturing homes and communities they heal. Indeed, traumatic experience can provide a wisdom and strength that is impossible to get any other way. Yet this healing takes place and wisdom grows only when the child is safe, secure and her emotional needs have been met.

Dr. Perry can also be seen in our debut feature-length documentary, It’s More Expensive To Do Nothing by HUMANE EXPOSURES films. You can also follow The ChildTrauma Academy on Twitter.

Source: “The Real Crisis of Katrina,” The Zero, The Official Website of Andrew Vachss, 2006
Image: ChildTrauma Academy Logo, copyright retained; fair use: reporting
Visit Us on Facebook: Humane Exposures Publishing , downTownUSA, Maggots in My Sweet Potatoes, It’s More Expensive To Do Nothing