Tag Archive for promotion of prostitution

Once More, Rehabilitation Urged Over Incarceration 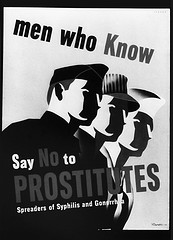 In Dallas, there is a debate raging over the proper way to deal with prostitution offenders. On one side, a police officer Randy Watkins from Ft. Worth endorses the reintroduction of a bill increasing the penalties for offenders caught in or near community spaces. School yards, public parks, churches and child care facilities all being examples of the public spaces in question. Officer Watkins says that, once enacted, word of the higher sentences will act as a deterrent to further crime.

On the other side of the argument is Judge Peggy Hoffman, presiding judge of a special court that rehabilitates prostitution offenders. At a recent hearing by the House Criminal Jurisprudence Committee, she stated publicly that increased jail time would be the least effective way to stop the “revolving door” that keeps prostitutes on the streets.

Hoffman disagreed, saying that increasing the jail time would not deter women from committing the crime. In Dallas County, 98 percent of women charged with prostitution opted to take jail time. The average time served in jail for prostitution is 10 to 20 days. That costs the city of Dallas $56 a day.

Judge Hoffman, it appears, is not alone in sharing this view. Mulvaney reports:

State Rep. Paula Pierson, D-Arlington, agreed that more jail time may not be the answer.

‘I’m sure some women aren’t victims of child abuse, some might not be drug addicts, but the majority of them are victims. They have been victimized all their lives,’ Pierson said. ‘It’s a bigger problem, a complicated problem.’

Acknowledging the social complexity of the issue is a start, but there is much more to be done. Hoffman favors cracking down on those who promote and enable the prostitution in the first place:

Pierson also stated that her office will be monitoring Hoffman’s special court to determine its effectiveness.

What are your thoughts on rehabilitation vs. incarceration? We would love to hear them in the comments!